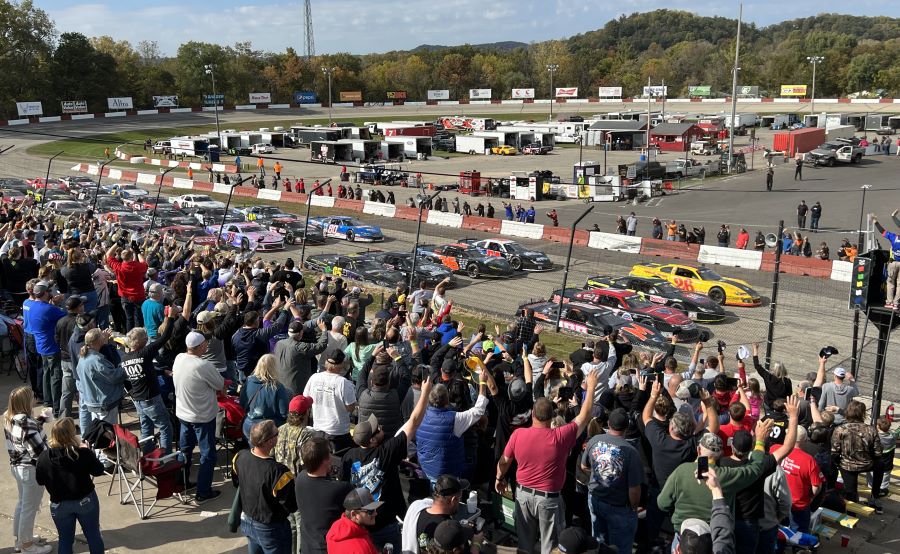 Sunny blue skies and warming temperatures greeted race fans for the final day of the 53rd edition of the Oktoberfest Race Weekend at the LaCrosse Speedway.  Sunday’s racing featured some fun racing with the Cratetoberfest 602 Challenge and the Upper Midwest Vintage Racing Series, but there was a championship still on the line.  The journey that started in May at Madison ended Sunday at Oktoberfest for the ARCA Midwest Tour.  Andrew Morrissey got by Derek Kraus with 30 laps remaining to capture his second Oktoberfest championship, while the third place effort of Casey Johnson garnered him the 2022 ARCA Midwest Tour season championship.

Chad Butz (Green Bay, WI) started on the pole for the 200 lap ARCA Midwest Tour Oktoberfest feature.  Butz showed the way for the first ten circuits before Dan Fredrickson (Lakeville, MN) before charging right by him to lead the field on lap 11.  After leading for 19 laps, Frerickson would be overtaken by a trio of contenders.  They included new race leader Gabe Sommers (Plover, WI), Casey Johnaon (Edgerton, WI) and Andrew Morrissey (DeForest, WI). Johnson and Morrissey powered their way under Sommers on lap 56 to take over the top two spots.  Ty Majeski (Seymour, WI) accepted the Ultimate Challenge with a big payday of $17,684 waiting for him if he was successful going from the back to the front.  After starting 27th Majeski got all the way up to 12th before the first competition yellow flag came out on lap 57.  The restart on lap 64 turned chaotic in turn four thanks to contact between the fifth, sixth and seventh place runners.  Ten drivers were caught up in that melee, and that ended a promising day for fast qualifier Matthew Henderson (Coon Valley, WI).  Sommers got back around Johnson to return to the front of the pack on lap 74.  Johnson found another gear and charged right by Sommers to settle back into the lead on lap 80.  Morrissey began to feel racy in his new ride as he put a ton of pressure on Johnson for the lead.  Morrissey just tagged the rear bumper of Johnson to zoom by for the number one position on lap 95.  Majeski’s quest for the Ultimate Challenge had him up to third by the midway mark of the race, with Derek Kraus (Stratford, WI) and Sommers rounding out the top five.

Majeski’s pursuit of the Ultimate Challenge was hampered for a few laps by a couple lapped cars, but he got around both of them on lap 104.  Majeski was doing everything he could to stay in touch with the leaders.  Many of the competitors needed to have attention done to their cars, and they were thankful for another competition yellow flag flying on lap 118.  Morrissey pulled away on the restart, while Majeski dove underneath Casey Johnson for second on lap 124.  Majeski almost threw it away when he ran wide in turn four after making the pass, but he was able to power away from Johnson down the front straight.  Billy Mohn spun in turn two to bring out the fourth caution with 70 circuits remaining.  Morrissey had his hands full holding off both Majeski and Johnson on the restart, but Majeski stuck with the outside groove to surge past Morrissey and into the race lead on lap 137.  Jeff Storm (Waterford, WI) had contact with William Sawalich (Eden Prairie, MN) resulting in a cut tire that slowed him down with just under 50 laps left.  As the field was coming to the restart with 43 laps to go, Majeski suddenly slowed as he found himself locked into gear.  That handed the lead over to Derek Kraus for the restart.  Butz and Nick Panitzke (Lonsdale, MN) made contact and went hard into the turn four styrofoam blocks on lap 163.  Kraus shot past Morrissey to take the lead on the restart, but Morrissey was all over Kraus to take the lead back.  Morrissey would sit back atop the mountain with 30 laps remaining.  A mechanical issue brought Harley Jankowski to a stop on the track with 19 laps left.  Morrissey pulled away as Kraus and Johnson fought over second to capture his second Oktoberfest 200 championship.  Johnson’s third place effort gave him ARCA Midwest Tour championship number three.  Despite that late mechanical issue Jankowski still beats out Tristan Swanson (Elko New Market, MN) for the Rookie of the Year title.

In the 25 lap Cratetoberfest 602 Challenge feature, Midwest Truck Series regular Bryce Miller (Columbus, WI) led the opening five circuits.  Mason Hellenbrand (Verona, WI) quickly caught Miller and powered around him to take charge of the race on lap six.  On his home track for many years, Tom Carlson (West Salem, WI) was slicing and dicing his way through the field in his quest for lead.  Carlson would catch Hellenbrand and drive around him at the halfway mark to be the leader of the pack.  As the field was coming to the line for the restart after a lap 14 yellow flag, somebody made an ill-advised move to cause a ten-car chain reaction crash on the front straight.  Carlson opened up his advantage over Tim Sargent (South Beloit, IL) on the restart and the veteran LaCrosse competitor pulled away to his first Oktoberfest championship since being back-to-back Oktoberfest main event champion in 1991 and 1992.  Then came the drawing for the brand new 602 crate motor among the other competitors.  This time around there was no drama as Kaukauna Late Model racer Henry Neerdaels was the lucky winner.

Ray Burrows (Oshkosh, WI) led the early laps of the 15 lap Upper Midwest Vintage Racing Series feature before being caught and passed by Davey Pennel (Sparta, WI) on a lap three restart.  Pennel, driving a Jim Back tribute car, tried to pull away from the field but Steve Rubeck (South Beloit, IL) was quickly closing in on the top spot.  Suddenly Pennel slowed in turn two with a mechanical issue and Rubeck was ‘Johnny on the Spot’ as he assumed the race lead.  Over the final seven laps Rubeck would have his hands full trying to fend off UMVRS veterans Jim Kulseth (Rosemount, MN) and Brian Lee (Holmen, WI).  Rubeck, in a Don Leach tribute car, drove away with his first Oktoberfest victory since his days of racing in the Big 8 Late Model Series.

With the final checkered flag of the year that will close the curtain on another memorable Oktoberfest Race Weekend, and bring a terrific 2022 racing season at the LaCrosse Speedway to an exciting conclusion.  We hope to see you all again to make some more fabulous racing memories at the 54th edition of the Oktoberfest Race Weekend on October 5, 6, 7 and 8 of 2023.  Weekly racing in the NASCAR Advance Auto Parts Weekly Series is tentatively scheduled to start on Saturday, May 13.  For more information about the LaCrosse Speedway, call the track office at 608-786-1525 or visit our web site at lacrossespeedway.com.  Be sure to like the LaCrosse Speedway’s Facebook page for the latest news, information and special announcements concerning the upcoming 2023 season.  We may be in for several big changes to the racing landscape of the Coulee Region leading up to the 2023 racing season.  LaCrosse Speedway is proud to be a NASCAR Hometrack, part of the NASCAR Advance Auto Parts Weekly Series.