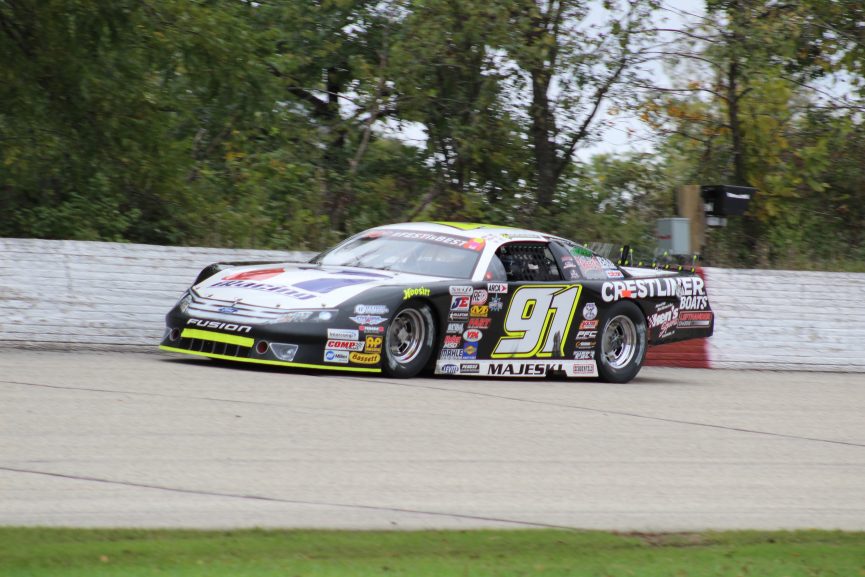 Mother Nature was successful in raining out the racing action on Saturday night, but a much sunnier day welcomed the race fans to the final day of the 50th Oktoberfest Race Weekend at the LaCrosse Speedway. It would be a very busy and jam packed final day with two days of racing crammed into one action filled afternoon. The final race of the year for the ARCA Midwest Tour was the highlight of Sunday’s extra big show. Ty Majeski captured the win and was crowned the 2019 Oktoberfest champion.

Carson Kvapil (Mooresville, NC) started on the pole of the Oktoberfest 200-lap ARCA Midwest Tour feature and led the first 50 laps of the race. Without warning, Kvapil turned right and bounced off the turn two wall to bring out the yellow on lap 56. Kvapil was able to return to the race after changing tires and inspecting the car. Erik Darnell (Park City, IL) took over the lead on the restart, but his lead would be short lived as Ty Majeski (Seymour, WI) powered around Darnell for the lead on lap 64. Darnell’s car found new life as charged back by Majeski to retake the lead on lap 90. A spin in turn two by Tim Springstroh (DePere, WI) on lap 111 brought out the yellow and the field to the pits for their halfway break. Ty Majeski powered his way under Darnell to put himself back on top on lap 117. Majeski’s time up front did not last long as Darnell surged by Majeski to assume command three laps later. After a competition caution came out on lap 169, Darnell and Majeski battled hard for the lead and the win. Majeski got the better of the battle to become the new leader with 16 to go. The final yellow flew with 15 to go for a tangle in turn four between Springstroh, Jason Weinkauf (Merrill, WI), Paul Shafer, Jr. (Portage, IN) and John DeAngelis, Jr. (Hubertus, WI). Majeski made a quick move to the lead on the restart. Charging through the field late was Dan Fredrickson (Lakeville, MN) on sticker tires. Fredrickson got all the way up to second, but Majeski’s move on the restart would be the deciding move. Majeski captured his second Oktoberfest 200 win in four years, and the Oktoberfest championship. Casey Johnson wound up finishing fifth, and that would crown him the 2019 ARCA Midwest Tour championship.

Nick Egan led early in the Big 8 Late Model feature, but Justin Neisius powered under Egan to take the top spot on lap three. Despite a couple early yellow flags for spins, Neisius broke away from the field on the restart. Nick Clements would get up to second by lap 10, and started to challenge Neisius for the lead. Clements tried to go high and tried to look low, but Neisius stood his ground and held onto the lead. As Niesius started to pull away, Jacob Goede and Nick Panitzke would loom large in his rear view mirror. Goede disposed of Clements for second on lap 18, and Panitzke dropped Clements another spot on lap 21. Goede powered around Niesius to become the new leader on lap 23. Three laps later it was Panitzke now in second and in pursuit of Goede. Yellow flew with four to go for Riley Stenjem’s spin in turn two, and that changed the complexion of the race with a double wide restart. Goede pulled away over that four lap shootout to claim his second Big 8 win in three races. Michael Bilderback drove to an eighth place finish, but it was good enough to lock up another Big 8 series championship.

In the Mid-American Stock Car Series feature, Dustin Mann took the early lead. The yellow flag for a hard crash in turn three on lap four involving Chris Weber, Matt Clements and Scott Luck. On the restart, Mann began to pull away from the field. Brad Warthan caught and passed Dale Lecus, Jr. for second and began to reel in Mann. Warthan would only get only get as close as five car lengths before Mann started to pull away again. Former Mid-American champ Dan Gilster began to work his way through the field as got around both Lecus, Jr. and Warthan to move into second by lap 18. Gilster began to slowly cut into Mann’s advantage over the final 12 laps. On the final lap, Gilster got side-by-side with Mann down the back straight. Gilster powered his way past Mann coming out of turn four to capture the checkered flag first.

Charlie Nickle took the lead early in the Midwest Dash Series feature. Gary Stark spun in turn four and took a hard hit into the turn four wall and the styrofoam blocks, ending his season championship hopes. George Sparkman drove around Nickle to take the lead on lap four. Brandon DeLacy would catch up to Sparkman and shot past him to become the new leader on lap seven. A few laps later Kyle Stark would drive around Sparkman to take over second. Stark tried to make a dent in DeLacy’s lead, but DeLacy continued to build on his lead. Phil Malouf would get around Sparkman just past halfway to take over third. Back up front, no one could match the pace DeLacy was setting as he claimed his first Oktoberfest win. Greg Blount ran fifth and wrapped up the 2019 series championship.

Brian Lee led the early going of the Upper Midwest Vintage Racing Series feature. Dan Linnehan, in the former Sportsmen car piloted by Todd Korish, charged past Lee for the lead on lap three. Meanwhile, on the fast track to the front was Woody Poole. Poole powered his way through traffic before catching and passing Linnehan on the outside for the lead on lap nine. Kevin Peterson in the Superamerica ‘Black Knight’ tried to catch Poole in the closing laps. Poole was no match for Peterson as he drove off with the Vintage feature victory for the fourth straight year.

In the ‘Cratetoberfest’ 602 feature, Frank Kreyer was quickly making his way through the field before powering past Eric Campbell on the outside on lap seven to become the new leader. Lap traffic made things interesting halfway through the race, but Kreyer pulled away from Dave Trute and Jason Stark to score the first ‘Cratetoberfest’ 602 feature win. Kreyer won a brand new 602 crate motor for his win, and Trute also picked up a new 602 crate motor in a drawing among the other entries.

Thank you for attending an historic Oktoberfest Race Weekend. We hope some great racing memories have been made to last you through the long, cold winter ahead. The final event of the 2019 season at the LaCrosse Speedway is the 300′ Bracket Nationals on Saturday, October 12. Don’t miss out on the Brunout Contest, as well as the Shine N’ Show Contest. Practice runs begin at 6:45, and the last Street Drags bracket racing of the season starts at 7:30.

For more information about the LaCrosse Speedway or the 2019 schedule of events, please call the office at 608-786-1525 or visit lacrossespeedway.com. LaCrosse Speedway is proud to be a NASCAR Hometrack, part of the NASCAR Whelen All-American Series.